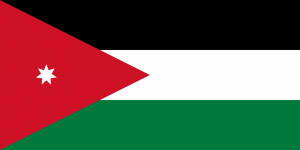 The Hashemite Kingdom Of Jordan

An Arab Muslim country, located in the north of the Arabian Peninsula and in West Asia. Bordered by Syria to the north, Iraq to the east, Saudi Arabia to the south and south-east, and Palestine (the West Bank) to the west it is located at 31 00 N, 36 00 E.

Jordan is named to the Jordan River, which passes on its western border, and Amman is the capital.

Jordan has a mild climate with no extreme of hot or cold (spring weather) during the congress period. Generally, Jordan’s climate and geography divides naturally into three regions: desert on the Eastern Bank, Heights East (warm and dry summers and mild, rainy winters and some snow) and Jordan Valley. The annual temperature averages between 12-15°C (59-77°F) up to a summer high of 28-36°C in desert regions. Average rainfall is of 50 mm (1.97 inches) a year in the desert to 800 mm (31.5 inches) in the northern highlands. Snow falls at intervals mostly in the Northern, Central and Southern Highlands and can be very heavy at times.

Jordan benefits from a diversity of geographical characteristics, from the river basin valley in the west to the desert in the east with some small hills and highlands. The lowest point is the Dead Sea: -408m (1338.6 ft) highest point: Jabal Rum, 1734 meters (5689thft).Jordan generally lacks freshwater sources. The river Jordan, the longest river in the country has reached low levels in recent decades.

Visitors must hold a passport or travel document with a minimum validity of six months beyond the visiting period. Most nationalities do not need visas for social/business visits.

You can get visa from embassy of Jordan in your country as some nationalities must obtain visas before travelling and some can obtain a visa from the  Queen Alia International airport upon arrival.

For more information visit the link below:

1 US Dollar is equivalent to 0.708 Jordan Dinar. Hotels will exchange money at all hours.

Tipping is not common practice in Jordan. Most hotels and large restaurants already include a 10% service charge and 16% government tax in their bills, so there is no need for tips and it’s your choice.

Taxis (Yellow) are inexpensive inside the city and often the most convenient form of transportation in Jordan. The white – painted (service taxis) offer transportation between fixed routes and are to be shared with other passengers. Private yellow taxis; can be taken from ranks outside larger hotels or hailed on the street.

Taxis drivers are friendly and usually speak some English.

Tipping is not included in the fare, whereas transportation of luggage comes extra if strapped to the outside of the taxi, or if carried several floors.

You will discover, among others, our traditional dish, which is called Mansaf. A choice of Mediterranean and Continental dishes will also be available. Jordanian Kitchen is very rich of Varieties

While Arabic is the official language in Jordan, English is also widely spoken.

The following list of useful phrases should help you get started with your introduction to the Arabic language as it is spoken in Jordan.

Private clinics and hospitals with international standards are available at very reasonable costs.

Doctor and Medical assistant are available at the congress location and duration.

The metric system is used.

For more information on Jordan, its people and culture, please visit: www.visitjordan.com